Finally, after so many delays we arrived in Cusco, Peru on February 11th. Cusco, a city in the Peruvian Andes, was once the capital of the Inca empire, and is now known for its archaeological remains and Spanish colonial architecture. Set at an altitude of 3,400m (11,200 feet), it’s the gateway to further Inca sites in the Urubamba (Sacred) Valley and the Inca Trail, a multi-day trek that ends at the mountain citadel of Machu Picchu.

Our first hostel in Peru, the Intro Hostel in Cusco, was amazing. We ended up spending 17 days here. Great location, great people, clean and comfortable. It ended up costing $12 per person a night including breakfast!

The view from our room at Intro Hostel in Cusco, Peru. 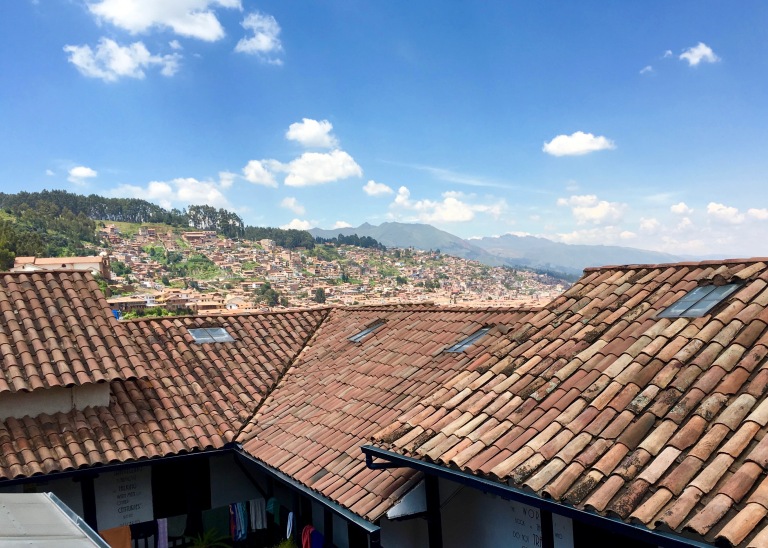 We loved how all the walls were painted with inspirational travel quotes!

We quickly learned to ask for the “menu del dia”, “menu especial”, or “menu Turistico”. The prices ranged from as little as S7 ($2) to S20 ($6). Here we are enjoying our first dinner in Cusco with Jared at what was to become our “go to” restaurant in Cusco. For fast, easy, delicious, and cheap we would to Qori Sara. This was my first time eating Alpaca. It was so amazing. I used to say “Alpacas are friends, not food” and now I say,”Alpacas make delicious friends!”

The best part of traveling is the people we meet, the conversations we have, and the ideas we share. Sometimes you meet people that you simply know will always be your friends. Erica Bullington and Josh Verbeck are two such people! We met them on their honeymoon. We love who they are as individuals and as a couple. We hold the space for them to have an amazing marriage! They are Couch Surfing hosts so if you want to have an amazing visit to Indiana go to www.couchsurfing.com.

We bumped into Alix Lindenbaum and her boyfriend Max in the Plaza San Francisco. We met Max when our connecting flight to Lima was cancelled in Orlando, Florida. Max recognized us and called out.  When Laurie and Alix met it was an instant connection for Life. Sisters who had never met. It is rare, but it happens. Seriously you could feel the magnetism!

El “mercado de san pedro” is a covered food/souvenir market next to San Pedro church. Here you can try a lot of different Peruvian meals for the cheapest price in town. Pig heads for caldo (soup), frogs (to enhance sexual performance), vats of fruit juice, roast lechón (suckling pig) and tamales are just a few of the foods on offer. Around the edges are typical clothes, spells, incense and other random products to keep you entertained for hours. 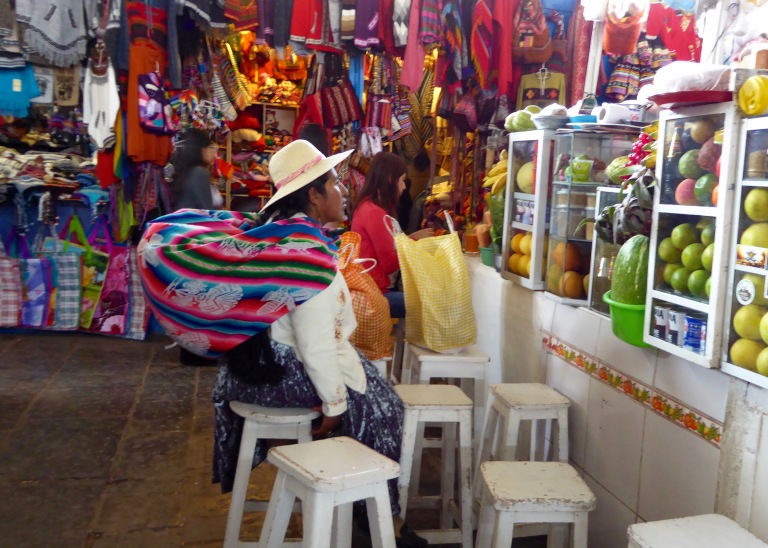 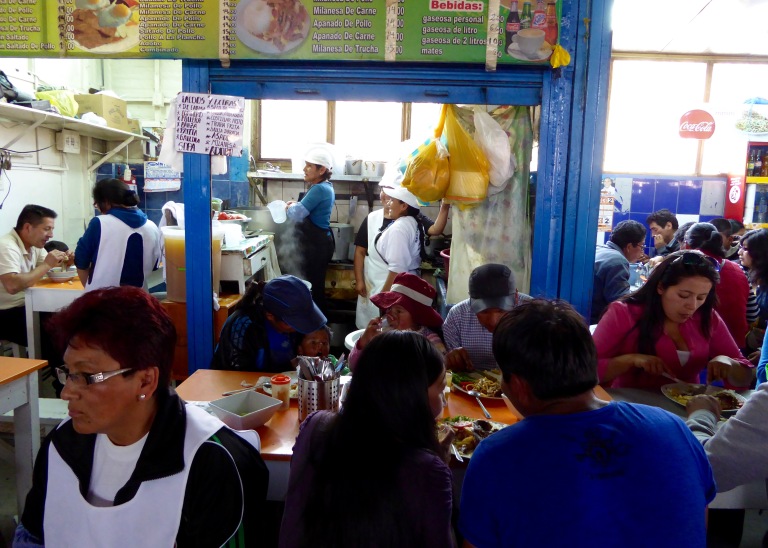 Outside the market I saw this poor man sweltering in the Cusco sun. I thought to myself,”Por que no?” gave him a Sole ($.33) and received a golden smile! 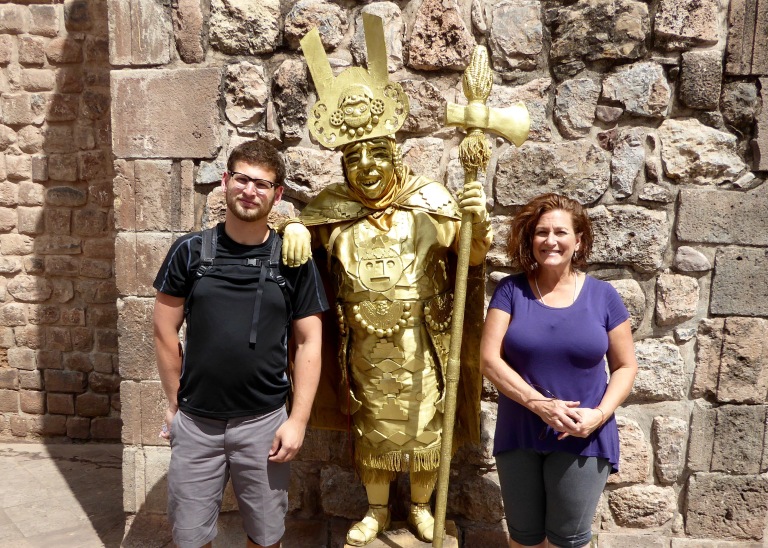 In Inca times, the plaza, called Huacaypata or Aucaypata, was the heart of the capital. Today, called Plaza de Armas, it’s the nerve center of the modern city. Two flags usually fly here, the red-and-white Peruvian flag and the rainbow-colored flag of Tahuantinsuyo. Easily mistaken for an international gay-pride banner, it represents the four quarters of the Inca empire. 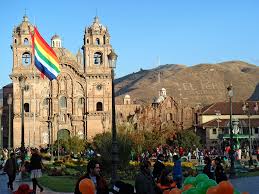 We loved walking the streets of the historic center of Cusco.It is one of the most beautiful places for me. The ancient structures, beautiful hills, and magnificent skies filled with clouds. This was our first time at such a high altitude. Up at 11,200 feet you really are so much closer to the clouds! These streets are really dangerous!!! I slipped several times as the street are all made up of very slick stone. The stones are slippery when dry because of the dust build up, when wet they are much safer. To enhance the danger of these streets is the fact that there is no pedestrian right of way in Peru. Enter any street at your own peril!!!

Statue of Pachacuti is one of my favorite statues in all of Peru. The Statue of Pachacuti can be found on the Plaza de Armas in Cusco. Pachacuti was the ninth ruler of the Kingdom of Cusco (“Sapa Inca”) and later the Emperor of the Inca Empire. Pachacuti began the expansion of the Inca dominion from the valley of Cusco to a big part of western South America. Some say that Machu Picchu was built as an estate for him.

The church in the background is the Iglesia de la Compañía de Jesús. Beginning construction of this church in 1571, the Jesuits decided to make it the most magnificent of Cusco’s churches. The archbishop of Cusco argued that it should not be allowed to compete with the cathedral as the seat of the diocese. The conflict became so heated that the parties appealed to Pope Paul III in Rome. By the time a ship took the message to the Pope in The Vatican in Europe, and his message had returned to South America, the Iglesia de la Compania de Jesus was almost finished. The Jesuits succeeded in keeping their ornate facade. 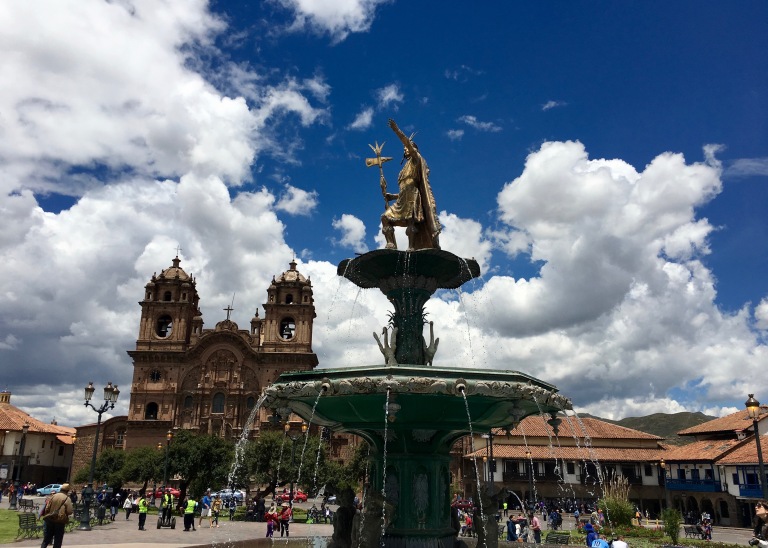 Here is a look inside:

This is the Catedral del Cuzco also known as the Catedral Basilica de la Virgen de la Asuncion. It is the mother church of the Roman Catholic Archdiocese of Cusco. The cathedral is located on the Plaza de Armas. Building was completed in 1654, almost a hundred years after construction began.

Adjacent and joined to the cathedral is the smaller Iglesia del Triunfo, the first Christian church to be built in Cusco. The Iglesia de la Compania de Jesus, also on the Plaza de Armas, was built at a similar time as the cathedral.

The Cathedral, in addition to its official status as a place of worship, has become a major repository of Cusco’s colonial art. It also holds many archeological artifacts and relics. The cathedral was designated a UNESCO World Heritage Site under the City of Cusco listing in 1983. 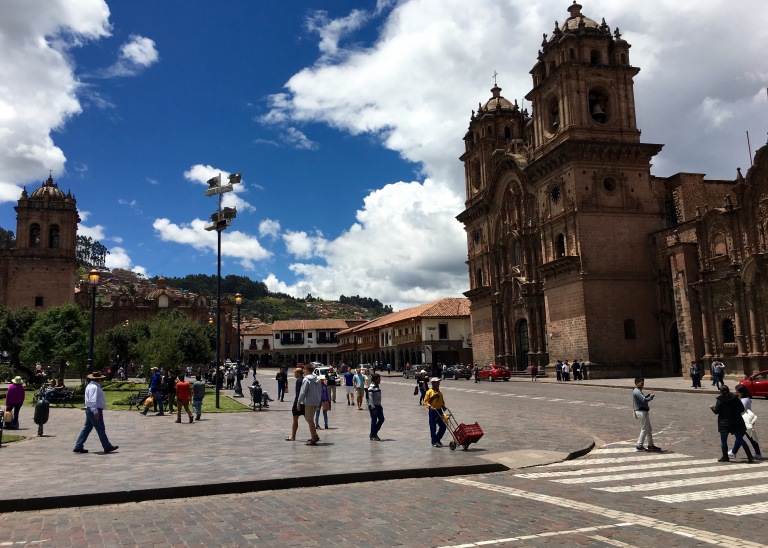 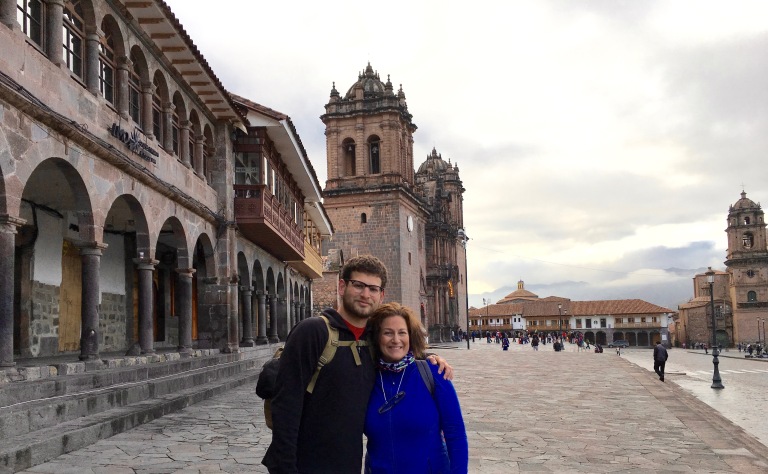 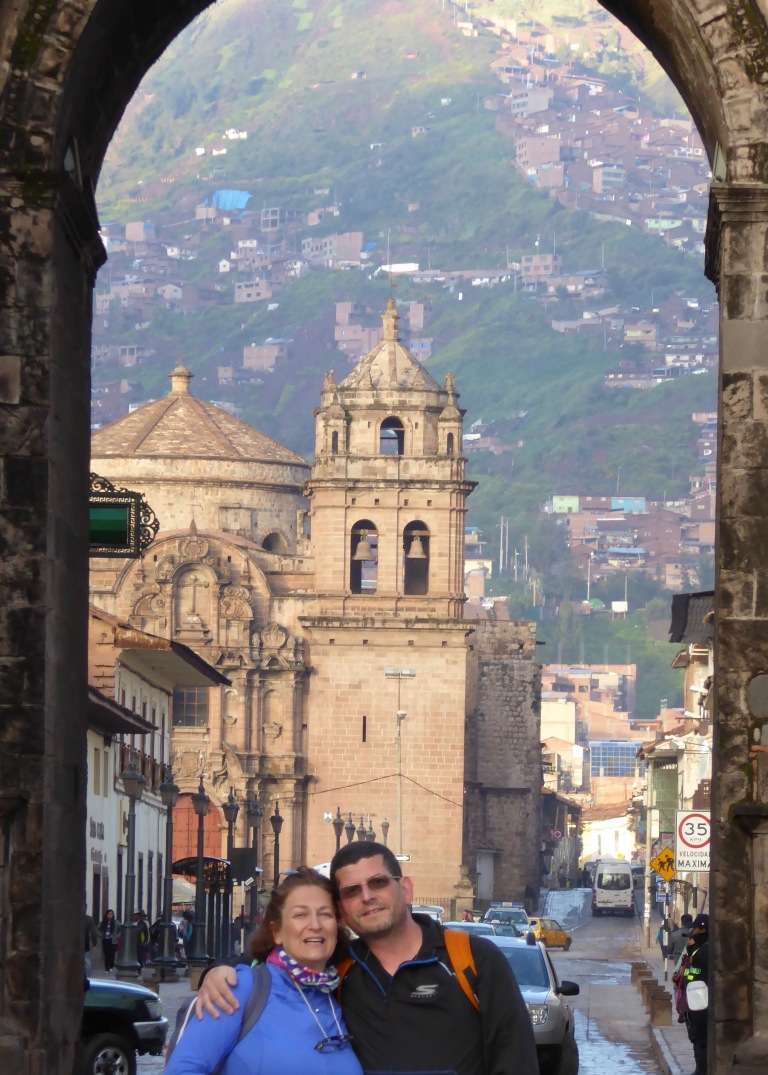 Jared and I were really committed to trying out some of the Cuy (Guinea Pig) that Peru is famous for. We came across this food fair on the Plaza San Francisco. However after seeing the faces on the fellows we opted to delay our impending culinary experience.

We were actually advised by some locals to not eat the Cuy at the food fair. Seems there is a right time and place to eat Cuy and this was not it. We decided as our time in Cusco drew to a close that we would eat our first Cuy in Ecuador. 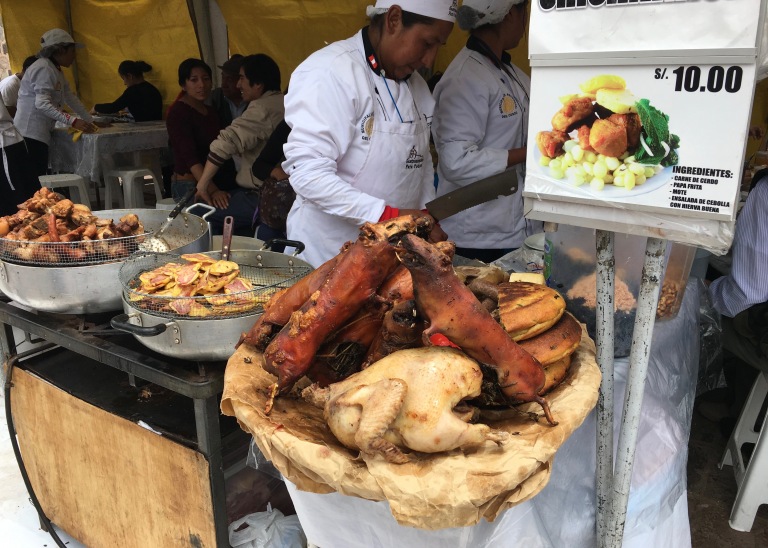 While we were in Cusco giving ourselves time to adapt to the high altitude Jared, Laurie, and I all signed up for a week of Spanish school at  Proyecto Peru . My teacher was Paul Penya. For 2.5 hours everyday we would converse in Spanish talking about everything under the sun. Paul is a great teacher and I really enjoyed my time with him.

This was Laurie’s first time ever studying Spanish. Her teacher was Miriam and her classmate was Elli from Australia.

Everywhere you go you see stray dogs. Seems like anytime is a great time for these dogs to take a siesta. 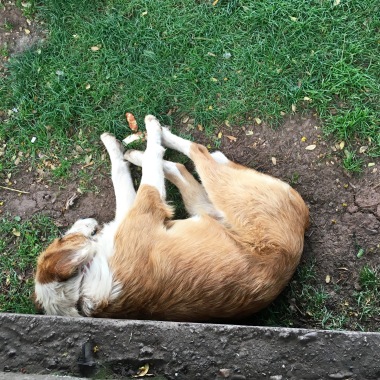 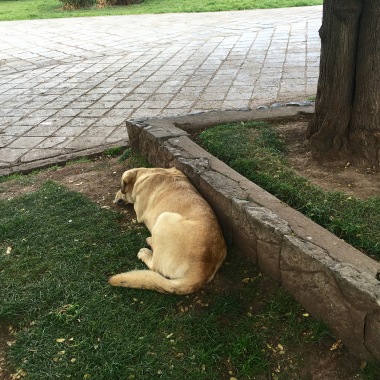 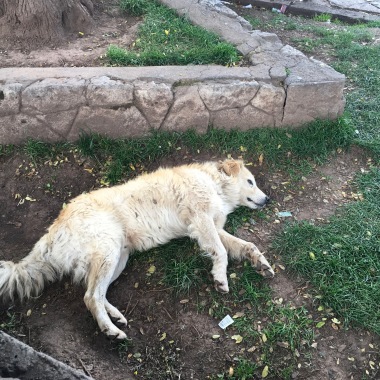 Volkswagen bugs are everywhere in Peru. They are kept in great shape and you can pick one up for as little as $800 in good condition. Jared and I seriously thought about what it would take to bring a few of these home. 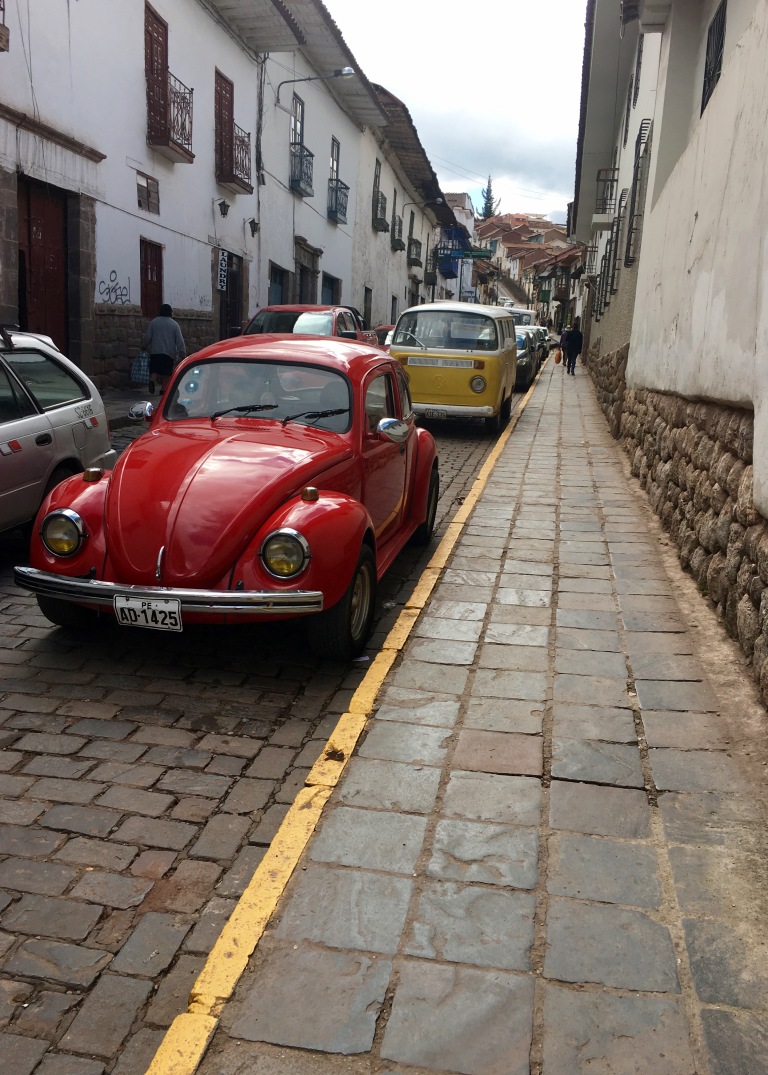 While in Cusco we took an amazing journey to Machu Picchu. Coming soon in my next post!